I've been searching for an code editor that suits my needs for quite a long time now, years it would be. I had previously been directed down a route of professional editors and IDEs for scripting and coding and the experience of all these has made me value an environment that can be made to suit my needs. I've spent a lot of work and a lot of time trialling various editors on Windows, Linux, Unix or even VMS. My career has caused me to use a variety of tools to edit code starting off using EDT and TPU keypad editors on VMS to create complex DCL scripts, QEDIT to code in QB4.5, that awful but fun IDE that comes with Visual Basic for MSDOS, the competent and productive IDE for VB6. Then I migrated to Microsoft Frontpage for Web design and HTML (plus other HTML editors) finally reverting back to a thoroughly decent advanced editor with code support, called Context where I have been scripting ever since using javascript, PHP, HTML, XML, some C++ and latterly jscript/Vbscript.

Fig 1. Various Editors/IDEs from the past

I love an IDE where all the tools required to build an application are provided from the graphical compositor to the code editor but I also realised early-on that a lightweight editor is a tool that I will always need and is often superior to an IDE for serious work.

My favoured editor for the last ten years has been the code editor 'Context', one of many advanced editors that have sprung up and the one I just happened to come across that immediately met my needs. It was quick to fire up, had no lags during operation, opens multiple files in tabs, it had language awareness, allowed key and colour customisation for language and the editor itself, the search utility was second to none, allowing searching through multiple files, it had an on-screen column ruler, allowed a search from the top of a document, search history and context retained across files, line number display, a single click on line number selecting a line, a pop-up search, full macro capabilities, project workspaces and file handling, text case handling, a file and search results window, auto-indent and file comparison and time-stamping, undo and redo history and much more. It was also freeware.

Written by a Delphi programmer, Eden Kirin, Context was a professional but lightweight tool and I was productive with it, soon it became my preferred editor of choice even when development of the editor stopped and the forum began to fill with spam. Despite this setback I carried on with the increasingly obsolete tool and grew to love it even more. I don't change editor easily, my choice of working environment is one that I am loathe to tinker with unless it brings real improvements in productivity. No Windows 10 GUI interfaces for me... 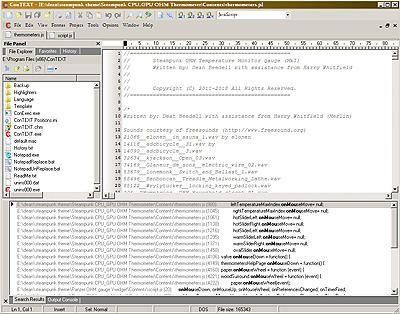 I downloaded the source code for Context and researched using Lazarus and the Free Pascal compiler and migrating the code to the new environment so that I could build/support the editor myself there. However, I soon realised that the job was beyond me, a new IDE, a new language with a totally different programming approach to the scripting languages I am familiar with, and a totally new build environment with unknown issues and bugs. This was clearly not a viable solution for me so I carried on working with the unsupported Context editor. I soon realised that working with a dead and unsupported editor is an increasingly futile thing to do as time goes on. I would have to find an editor that was living.

My search for a decent editor replacement began again in earnest. I tried every freeware and commercial trialware Windows editor that would suit my mainly-scripting needs, from full-blown multi-language IDEs through dedicated language editors down to emulated keypad editors from my early scripting days. Each was downloaded and installed and used for a period of days or weeks. I won't list them all here as there were many, each was easily and quickly dismissed through lacking what I would consider to be any one of the basic functionalities as listed earlier. I finally determined to adopt an editor from an alien environment, that editor was the default editor for the KDE environment on Linux or Kubuntu, known as Kate. 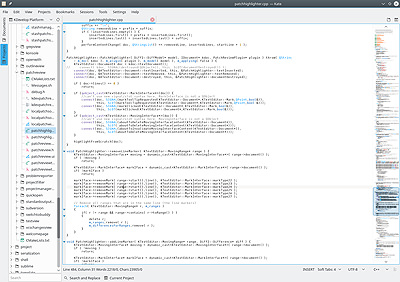 Kate was in many ways a revolution for me, first of all being a non-Windows application running natively on Windows through some special trickery and as a result having a Linux approach to menus, options and development. It had some functionality that I had never seen before, the graphical scrollbar was one that astounded me, in addition Kate did so much more than my old editor. However, the search functionality was inadequate for an advanced code editor, some configurability was absent and the resistance to change from the developers led me to realise that Kate is just not yet ready for productive use on Windows. The main things that deterred me from using Kate were the lack of a pop-up search, preferring to bottom-load the search on the base of the editor window, poor search history and an inability to search multiple files and no ruler!. Search is the fundamental basis for code debugging and a poor search leads to poor productivity. So Kate was abandoned with reluctance and my search carried on, leaving me surprised that it was so hard to find an editor that matched my seemingly quite basic requirements.

I stopped looking for an editor entirely but then out of nowhere came RjTextEd. Not quite sure how I found it but as soon as I saw it, I downloaded it and gave it a try. It was immediately apparent that the editor matched all of my needs without a single mis-match, it was quick to run, quick to operate, had full documentation and was free to use. It was written in Delphi and matched my previous Context editor so closely in functionality that I initially felt it was modelled on that older editor. I may be completely wrong in this assumption but it matches it my requirements so closely that it feels it has almost been written specifically for me. 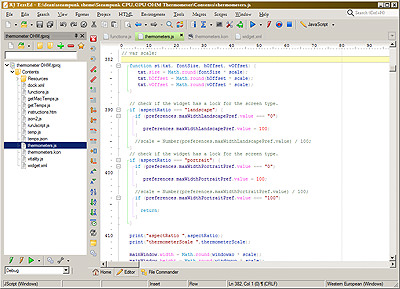 RjTextEd is not just a direct replacement for Context, it has turned out to be so much more than that. It provides so much more functionality and it feels as if it is the product that Context would have been, if development had continued over the last eight or so years. I cannot currently list the functionality that RjTextEd has as I am still researching and identifying what it provides. It seems to at least match what Kate provides and surpasses it in various important ways. I have to say that I am incredibly impressed that this is the creation of just one man. The end result is a really impressive editor that even Microsoft would be proud of.

Why am I enthusing so much about what some would say is merely an editor? Well your favourite editor is like your favourite pair of old shoes, you don't want to change them as you don't go through the pain of wearing them in. You want to run and be productive, not hobbled by a slow pair of shoes. I tried IDEs from Microsoft that were slow to start, slow to run and were black in colour. Not my pair of running shoes.

I keep my old shoes just as I keep my old editors and even now I still sometimes use EDT+, a keypad editor for VMS (that now runs on Windows) - but not often.

RjTextEd has replaced Context as my daily editor of choice for the work I am doing at the moment, that is javascript and XML scripting. I use it in conjunction with Photoshop as my graphical compositor to create a working environment that matches a lot of what a dedicated language IDE could provide. I still retain Context as a replacement editor for simple file editing as it is really quick to start - but I am really only using it as a replacement for notepad on those few occasions when I open a text file, RjTextEd is overkill for that.

RjTextEd is my main development tool now. Thanks to Rickard for developing RjTextEd, I hope to push the editor to other developers and hope that its popularity will increase. I am convinced it will.
"Noli pati a scelestis opprimi"... or is it "non lacessit illegitimae te carborundum"?

Every single new day I use this editor I smile a bit more. I find out something new and useful and my productivity increases.
"Noli pati a scelestis opprimi"... or is it "non lacessit illegitimae te carborundum"?

Thank you for the great article. It's appreciated.

I've had several old Context editor users making feature request over the years so it's not surprising there may be a few similar features in the program. I even had it installed for some testing a while back. But of the editors from the good old days - I really liked Crimson editor

I never tried Crimson Editor and I doubt I will having found RJTextEd.

I was rather surprised to find so many Context editor features but I assumed that it was because it was a lot of what RjTextEd provided was simply best-practice. I am raising a few questions/bugs/queries as I want to make RJTextEd match my Context user experience as closely as possible. That, I believe is the strength of your editor, configuration ability.

I am not 100% content with searching (as you will find) but I've made some recommendations that I hope you will find to be positive.

On the article front, I'll submit that article here and there as I find a good location for it. I won't submit it too often but just in some select places. I can't offer much in a monetary sense at the moment but I can give my time and what brain I have.

Pleased to assist.
"Noli pati a scelestis opprimi"... or is it "non lacessit illegitimae te carborundum"?

You can find me on Deviantart https://www.deviantart.com/yereverluvinuncleber/gallery/
Top
Post Reply
5 posts • Page 1 of 1